Aus v Ind – #2 most likely to loose his balls

Im so excited to present to you the no2 player

MOST LIKELY TO LOOSE HIS BALLS! 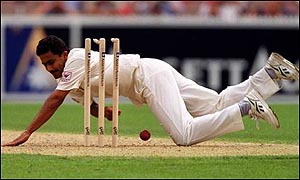 “Kumble has lost his balls before”

Yes, Captains are well known to loose their balls.

Kumble is another who plays under the Brearley/Taylor rule.

Thinks the ‘spirit of cricket’ is what a child molesting journo writes about in Australia.

Under stress from Dhoni for the captaincy.

Does weird wicket celebrations which are frankly, a bit gay.

One and a half nuts.

He might save his ass and ball(whats the word for half a nut?), if he wins the series , otherwise young buck Dhoni and his troop of female bodyguards will oust him from his throne

Possibly the last series he will captain if India loose.

Stay tuned as we crown the NO1 PLAYER TO LOOSE HIS BALLS in the BGS!