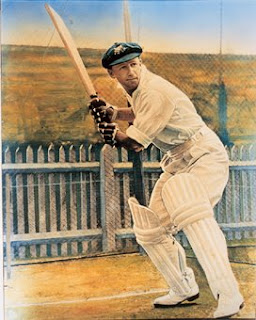 At least in my book.

100 years on from August 27th 1908. For anyone non-wise to this date- it is when The Don was born. So today we celebrate the 100th Birth day of the greatest player of all time and the greatest player ever to step on to a patch of green to play cricket to wield a willow.

The legend of the great man has touched every single cricket fan alive.

It would be unthinkable for me to not pay tribute to the man.
However, being Sri Lankan, I thought I’d add a little spice with a Sri Lankan flavor to it.

This post is the fruit of endless bits of research over the last few weeks and a lot of help from some friends over in Australia. So here goes. But be warned this will be a long rant!

The Australians played in Colombo against the All Ceylon team on 2nd April 1930, Bradman was out hit wicket for the first ball bowled by N.S.Joseph, in his debut match. This is supposed to be the first and the only occasion that Bradman got out hit wicket.Australians were all out for 233, All Ceylon 52 for 1 at close, the match was interrupted by rain and ended in a draw.

Here is where it starts to get interesting. I was able to track down a entry in Bradmans personal diary detailing this very match. Below is the full entry in the diary

http://www.slsa.sa.gov.au/bradman/scrapbooks/08/bsb08064.htm
This excerpt from Bradmans diary is Copyrighted Republishing this image without prior consent from SLSA is strictly prohibited.

“Standard of cricket quite high”- There you have it folks, from the man himself. This was an assessment that caused my heart to flutter. To have such high praised heaped upon our countrymen even in those days says. Words fail me.

The 1934 and 1938 visits were less eventful. There do not appear to be too many records of the tour at all.

Don Bradman did not play in the Australian team’s tours in 1934, and in 1938 Bradman had a ‘cold’, the Sri Lankan spectators were very disappointed.

This goes to prove that the legend of Bradman was not contained to England and Australia or even India. Bradman was a hugely popular figure in Ceylon. There are many stories of the crowds flocking to see Bradman when the touring ships called into port in Colombo.

1948
An example of this can he highlighted in the 1948 visit by the Australians.

This particular match, played over just a day, as was the tradition of all the matches played by the touring Australian team, was littered with quite a few colorful events, not least was a 20 yard pitch which confounded the Australian batsmen until they discovered the error !

Jack Fingleton writes an account of the match in his 1949 book, Brightly fades The Don. Fingleton fondly recalls his memories of the then Colombo, the now infamous 20 yard pitch and the curious, curatoress! Bradman coming out in a toppee is priceless. Him and Barnes fighting for the strike and needling each other in the middle is both intriguing and enjoyable to read. This was the human and rather mischievous side of the great man.

He makes mention of the notorious Colombo heat and the enchanting scoreboard at the Colombo oval. It seems no surprise that he was affected by the intense heat in Colombo. Many have suffered its wrath. Further proof that the man was human after all (which somehow makes his records seem even more incredible).

The love for Bradman in Sri Lanka is evident in an excerpt from “Bradman” by Charles Williams. Sri Lankan fans would ride out in tiny boats when the ship from Australia neared the harbour hoping for a sighting of the Don. Cricinfo provides a brief summation of the 1948 game.

On 27th March 1948 there was a crowd of about 20,000 at the Colombo Oval, to see Bradman play for the last time in Sri Lanka, Don Bradman was able to score only 20 runs as he was caught by R.L. de Krester bowled B. Russell Heyn. Australia declared at 184 for 4 an hour before close of play, All-Ceylon were 46 for 2 when rain stopped play. This match was memorable for another reason as the length of the pitch was 20 yards and not 22. Australian batsman found it hard to get the ball away, they bowled from two yards behind the bowling crease.

Sir Do
nald would have been a 100 years old today. Mortals such as us will never have the privilege to see this man in action. He played cricket test cricket in 4 countries. But Sri Lanka has the honor of being the 5th and only other country (correct me if I am wrong) where the Don pulled on his white flannels to play cricket. From all accounts, even his personal diaries, it seems he held our cricket in high regard, and our country in even a higher plane.

There can be no greater honor for Sri Lankan cricket.

Many Happy returns of the day Sir Donald, where ever you may be.

Note: I have a few more excerpts from some books on the 1948 game. If interested let me know in the comments section