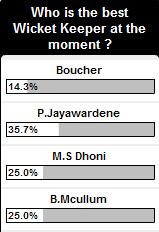 A recent poll conducted online revealed that most cricket fans out there reckon that our boy PJ is the best man behind the sticks going around.

Which I would say is a fairly accurate analysis when you consider his keeping ability. When the Indians, including their much loathed ‘Fab 4’ , went cross-eyed trying to read Mendis and Murali, who will from here on be referred as MnM, (not the mint, but the bowlers), PJ seemed to pick up what the two ‘freaks’ were doing with constant ease.

Which leaves me dumbfounded as to his complete ineptness ,it seems, in hitting the ball off the square. The man’s managed to earn himself a spot in the team solely on his keeping ability, which says a lot about his keeping but unfortunately for Sri Lanka his lack of runs will surely tell sooner rather than later.

PJ usually comes in at number 6 or 7 and by no means can that be considered the tail end of our batting line up. At least not in the modern game. His lack of runs needs to catch the eye of the selectors who must be mindful that he is not indispensable. Sangakkara can be used at any given time to take up the gloves when we need to bring in the additional batsmen/all-rounder or bowler (my personal choice but thats for another day.) The notion of ‘off loading’ Kumar is a bit dodgy if PJ keeps failing to notch up the runs.

Expecting PJ to to average around 30-35 cannot be asking him too much. Mark Boucher averages 30, Mcullum 31. I believe these are fair comparisons as both Boucher and Mcullum fulfill similar roles for their teams and bat at similar positions.

From what I have seen PJ has the technique to get the runs, its possibly due to a lack of confidence and nerves that get him out.

If you wish to vote on the poll go here