The Coconut Smash- an introduction

Keeping in line with Suave’s hulk smash phenomenon , flyslips come up with its own brand of Island rage… Introducing

What?
The coconut smash will be used on the dire , nit wit, absolutely moronic Sri Lankan performers. It will executed, clinically, by smashing a ripe King Coconut over the offending baboon.

Why a Coconut?
Ahh.. the inevitable question..but what you really want to be asking is..why not a coconut ?
(But I think it has to do with us coming from an Island or something..)

When?
Id think this is self explanatory. When ever one of you fuck up. Ima fuck you up. 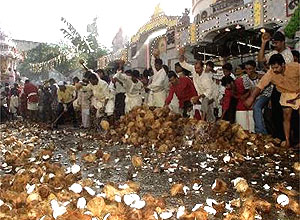 Can you spot Upul Tharanga under the pile of coco’s ?

Any Ideas on who will cop the first coco smash ?